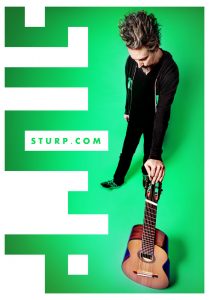 What is STURP?
STURP is instrumental music: Guitar, banjo and drums. Because of the frequent use of distorted guitars one could call the genre ‘Instrumetal’.
STURP is from Amsterdam, the Netherlands.
STURP is a solo-project.

About Sturp’s in 2014 released debut-album Rapid Germination the following has been written:

“A really good mix of styles is poured over you” Lords of Metal
“Absurd, avant-gardist and insane at the same time” Gonzo (circus)
“It is almost impossible to capture all the musical impulses that come at you in words” Rockportaal
“Sturp blows me away with this CD. I am absolutely very impressed.” Metal from NL
“Pretty merciless. Nothing wrong with that.” Musicmaker

And about the second album Fumigation of Grain (2016) the press wrote:

“And let’s be honest from the start; the music is just whacking weird!”
“the videos (from all thirteen tracks!) are, mildly put, pretty absurd.”
“Complete madness here.”
Progwereld

“solid production”
“Carefully thought out and expeditiously the music creeps and craws under your skin.”
Musicmaker

“a very innovative Dutch instrumental solo project.”
“You just begin to see the genius of the disc.”
“Deliciously floating away with Sturp, also that is possible”
Ashladan

“Sturp literally blows you away with their distinct sound”
“Great guitar play”
“These surprising combinations of instruments are interesting, to say the least.”
“This album is quite the ride, intense and unorthodox. Be prepared!”
PitKings

The term STURP was also used for the Shroud of TUrin Research Project. That project was not related to sonical outbursts.

One would say that because of the link to the shroud there’s more to STURP than meets the eye. Well, that’s not the case as STURP has no religious connections, but recently something remarkable occurred. As I was making the artwork for the STURP custom printed picks, I noticed that the STURP-logo upside-down looked like it read ‘d SUS’. How close is that to Jesus! So the STURP-logo seems to have AT LEAST as much of Christ in it as the Turin shroud has. Remarkable indeed. Pic (or pick as you like) to prove! 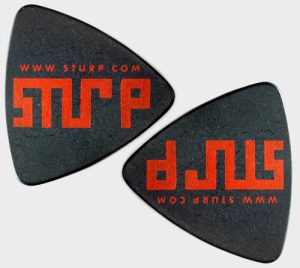 2018: STURP LIVE!
In 2018 STURP will go onstage. As a duo: drums and guitar/banjo. Step right up! Gigs will be announced at this site of course.