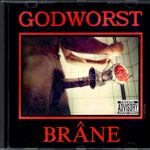 In 1993 the band Godworst with vocalist Mark, bass player André, drummer Richard and guitarists Paul and Daan was founded in Amsterdam. They breed on a singular sound with crunchy guitars and harmonized vocals.

In the spring of 1994 their notorious first CD Brâne with the controversial cover photo of a to minced meat pulverised penis, is live recorded on a barge in the heart of Haarlem.
This CD is CD of the day in the Haarlems Dagblad.
Godworst is also, amongst other things, invited for the Sziget festival ‘95 in Hungary where the band gives a memorable concert on the main stage.
Shortly after this, a musical collision leads to the departure of Paul.

The mini-CD Godworst (1997) is very well received in various musicmagazines and provides Godworst the label ‘heaviest band of Holland’. The CD is CD of the Month in Musicmaker followed by a concert at Leidsekade Live!, National Dutch Radio, at Paradiso, Amsterdam, early 1998. 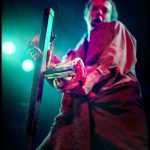 But it seems at that time people are not ready for Godworst yet. In addition, vocalist Mark is fed up with the much talked about ‘penis in meat grinder’ stage act and the image associated with it. 1999: Godworst RIP…

At the end of 2013 Richard, André and Daan get a request from a certain Marlène to come to talk about a possible musical collaboration. It’s a big surprise when Marlène seems to be no one else than former singer Mark. This transformation of Mark into Marlène, in retrospect, has always been manifested in the lyrics and act of this lady to be. 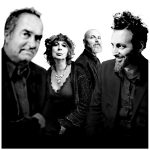 Lyrics in which the search for gender identity is the Leitmotiv. Songs like Let’s Stumble, I’m Not Strange and The Belly are an important indication for this huge struggle. A struggle which also expresses itself in Marlène’s sculptures; with the same combination of strength and suppleness as the music of Godworst. For reborn Godworst, now a lady and three gentlemen, it provides a new impulse. This can be heard in the energetic sound: solid and grooving.